I am on my way home from the Lee Hyla Memorial Concert at St. Mark's in the Bowery this afternoon.  It was a moving event that filled me with joy at the delicate rage and furious beauty of Lee's music, and also brought great tragedy for all the music that will remain unwritten.
c)i (Miranda Cuckson, Ning Yu, and guest Mariel Roberts) performed Lee's Amnesia Redux along side so many of Lee's friends and collaborators: Jim Pugliese; Christine Bard; Rhonda Rider; Marty Ehrlich; Stephen Drury; Tim Smith; and Vicky Chow, Trevor Dunn, Kenny Wollensen.
Before c)i played, I said a few words, which I hadn't been expecting to do; I think that they went something like this:
Early in c)i's existence, we took on a large project with him, his Miller Theater portrait concert.  This was a big deal from him and a very big deal for us, but what mattered most to me, and to c)i, I think, was his trust in our ability to pull that event off.  That is what Lee taught me, to trust in me, in my abilities and capacities and notions of what might be possible in music and in life.  Like Mathew (Rosenblum) said,  Lee's honesty and directness were at the very core of how he lived, and he taught me that it is through authentic commitment to one's own vision (not to the vicissitudes of what one should do, or what would gain one advantage) that one genuinely connects with people in the way that one must to create the musice of surpassing excellence that he did with every work.
Our sorrow is great, but also great is the beauty he gave us.
Posted by Douglas Boyce at 4:08 PM No comments: 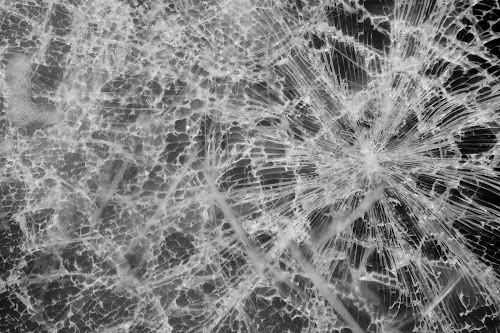 Sadly, you don't often play pieces more than once or twice in the new music world.  Most of the time, we pour ourselves into learning an intricate web of rhythms and timbres for a piece that evaporates from our muscle memory only a few weeks afterwards.

My first experience with Mario Davidovsky was 10 years ago, when I learned Festino with my talented colleague and guitarist Dan Lippel for the Look and Listen Festival.   It was a first on many levels: my first piece of contemporary repertoire with guitar, the first where the violist was the highest voice, and the first time I played with double bass in a quartet setting.

We spent hours and hours of slow, fast, and every-notch-in-between practice just to get everything lined up.  When Mario came to visit a rehearsal (which always happens when logistically possible) it was just starting to hang together....just.  The performance itself was a bracing roller coaster ride as we strained to hear each gesture as it flew by, further complicated by that bathroom-like acoustic particular to NYC art galleries below 34th Street.

Read more »
Posted by Jessica Meyer at 6:16 AM No comments:

Miranda Cuckson wrote this beautiful essay about her experience with Mario Davidovsky and his music.

My group counter)induction is presenting a concert of Mario Davidovsky’s music on June 7 at Subculture. I wrote this essay below, which will appear on c)i’s blog and in abbreviated form in the program booklet. (Also my organization Nunc will be performing his music at the Teatro Colon on August 15-17.)
counter)induction is thrilled to close this season with a concert tribute to the great Argentine-American composer Mario Davidovsky. Mario, who turned 80 this year, has been a central figure in contemporary music since his pioneering compositions with electronics in the 1960s. Through his subsequent work at such institutions as Harvard University, the Composers Conference, and the Koussevitsky and Fromm Foundations, and his attendance at innumerable concerts and events over the years, he has been a key participant in the discussion and support of the music of our time. Even as technology evolved far beyond the methods he originally used, he has stayed true to his core musical impulses and values, steadily creating an oeuvre much beloved by a cadre of remarkable performers and listeners. This August, he will revisit Buenos Aires, where the distinguished Teatro Colón will honor him with several concerts.

Read more »
Posted by Kyle Bartlett at 7:44 PM No comments: 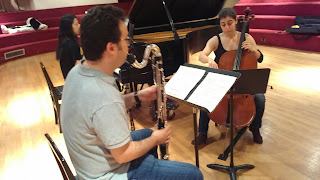 The band is getting ready for dress rehearsal of my piece 'Bird-Like Things...' and I thought that I would share the program notes, in advance of tonight's performance.  This is a piece that has grown on me and grown with its performances, becoming more refined and compact, but also more open and varied in the options available to performers; I'm very excited about this performance of this group of performers:


'Bird-like Things in Things like Trees' was conceived along with painter Rob Tarbell during a stay in the medieval village of Auvillar in south-western France at the Virginia Center for Creative Arts. As we shifted into the slower pace of Auvillarian life, focused on natural, agrarian cycles of the day, season, and the harvest, we each were struck by a heightened presence of birds in our lives— birds were not to beings to be observed, but part of the every day, circling and singing on the way to the market, hovering and pilfering during our meal time, and entering our studios sometimes in an explosive flutter, and sometimes as a surprise guest on our tables, canvases, and scores.  Neither of us had pursued mimetics or have much interest in strongly representational practices, but we felt obligated by our situation to trace our encounters with these birds into our art in some way.  This is a rather different situation than 'mimesis' – we drew and sang things that were like birds, but that bird-ness is revealed most clearly in the gesture of their tracing. This is ekphrasis far more than it is mimesis; what is figured is that act of figuring, rather than the figured.  These are processes in which source material is only occasionally clearly visible or audible; the originary image or sound is 'worked' so thoroughly that connection to the source is replaced by connections to the subsequent iteration of 'working.'  Thus the audience is hearing traces of sense memories of birds: the obstinate pica pica, and the ortolan, that royal feast so delicious that its enjoyment must by hidden from God by a napkin placed over the head.  But also represented is the milieu in which these birds fly and nest and sing and eat.  This piece is less about verisimilar representation than it is about the gap between experience, memory, and communication: the composition and the improvisation of the performers is the folding and refolding of memory and experiential trace, the transition from event to memory, memory to speculation, and speculation back into being is that bird-like behavior called musicking.  The composition of this work has been supported by a grant from the The George Washington University.

Posted by Douglas Boyce at 11:09 AM No comments:


"The less we just stare at the hammer-thing, and the more we seize hold of it and use it, the more primordial does our relationship to it become, and the more unveiledly is it encountered as that which it is—as equipment. The hammering itself uncovers the specific ‘manipulability’ of the hammer. The kind of Being which equipment possesses—in which it manifests itself in its own right—we call ‘readiness-to-hand’." (Being and Time 15: 98)

I am having some of my students wrestling with the passage right now, and it has struck me (in the run up to this concert) as full of insight into the whole notion of 'etude' that we are engaging with here, and with the technical aspects of performance in general.

Posted by Douglas Boyce at 7:52 PM No comments:

Out of the Shadows... 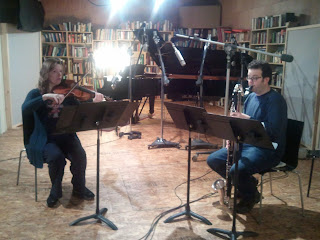 My favorite moments of being a member of counter)induction are when I am working alongside a composer to premiere their piece.  Over the years, I have known Ryan Streber more as an amazing audio engineer than a composer - but it has been such a joy having him coach us on his new work.

What happens between getting the music in your mind onto the page and the actual performance is an interesting process.  Some things get cut, ideas are added, passages are rethought after trying them out in different ways.

His "Shadow Etudes" is in three movements.  The first is called "Wheel Variations", where the viola and clarinet cyclically move through passages of alternating textures and rhythms as they shadow each other.  The middle movement utilizes a haunting array of colors that only our specific instruments can make, while the final movement is full of rollicking hocketed rhythms.

Hope to see you tomorrow at 6pm!

Posted by Jessica Meyer at 6:32 AM No comments: 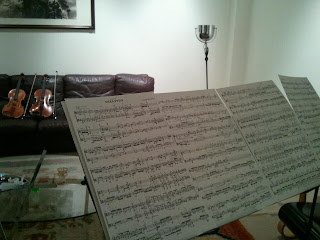 Looking forward to c)i's next concert this Thursday at the NY Public Library for the Performing Arts' Bruno Walter Auditorium! I love the library there, I've done much reading and looking for pieces in both the circulating and research collections, and did a recital of Ross Lee Finney's music there when I was doing my dissertation (the NYPL has his papers).

Our program is called "Etudes and Studies" and features works by a diverse assortment of composers, from Debussy and Rachmaninoff to new works by c)i composers Ryan Streber and Douglas Boyce. It seems to me that, rather than focusing on etudes as means of exploring or showcasing instrumental virtuosity, this program looks at "studies" more from a compositional standpoint: the composer's work piece, in which he/she examines a question of craft or expression using a certain medium (say, string quartet, or viola and clarinet duo). So we have the quietly flowing counterpoint and displaced rhythms of Dallapiccola's Two Studies for violin and piano, the concise working-out of ideas in Berio's Study for String Quartet, and George Benjamin's remarkable exploration of the sound of two violas, layering them in waves, each climbing to high singing notes, tossing pizzicatos back and forth, and together keeping a propulsive triplet motion going though the piece. Brilliant piece for the performers but a fascinating study in sound and construction too! I'm looking forward to hear the whole program- hope to see you!
Posted by Miranda at 7:40 AM No comments:

Listen to c)i on the web!